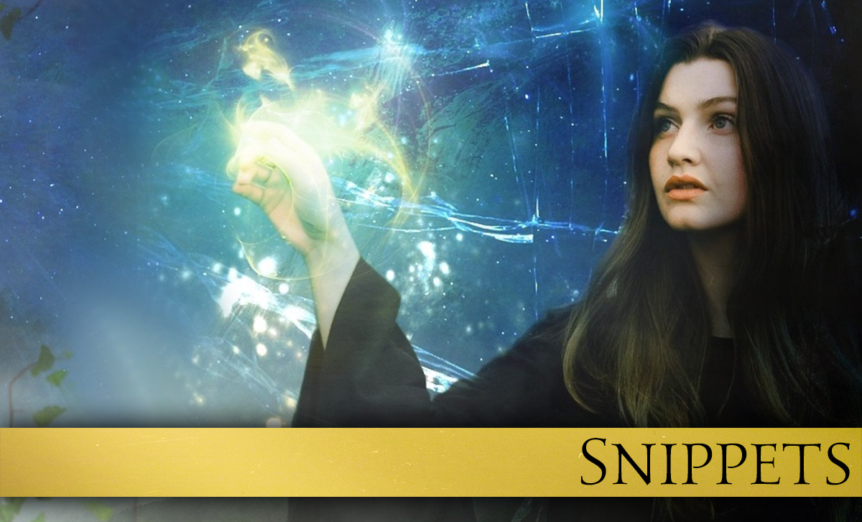 The terrain was comprised of rolling hills, which the horses managed easily. Even the little unicorn was able to handle the rise and fall of the land without issue. What he was poor at was remaining quiet.

“When do you think Mage Lenore will deliver my wand? I keep checking each morning. Did you ask her when you met? Which reminds me, have any of you ever had a canker sore in your mouth? The queen mother says that it’s because I talk too much, but I don’t know—”

“How did Mage Lenore remind you of a canker sore?” Monet asked, cutting Blisters off.

The unicorn laughed, making Gillian bounce up and down. “Oh, you’re funny. So, in preparation for the trip I brought lots of supplies. Water, matches, candles, candy—”

“Why did you bring a fire starter?” Gillian asked, his voice irritated.

“Because I’m afraid of the dark,” Blisters said, his high-pitched voice full of shame.

“No, I mean, why would you clutter up your saddlebags with such things when we are able to manifest fire with magic?” Gillian shook his head.

Monet pulled his horse up next to Azure, who was in the lead. “Do you also sense that we will be dumber by the end of this journey? I can feel the brain cells popping in my head.”

“If you get poisoned or mortally wounded you’ll be grateful that a unicorn is one of your traveling companions,” Azure said, her eyes on the upcoming ridge, which bordered the Conca River.

“You know what, that’s what I loathe about you. You’re always trying to see the best in people or a situation like a fucking optimist,” Monet complained.

“I only ever see your numerous flaws, though. Did you know that you have one nostril that’s larger than the other? And you have baby hands. Oh, and your jaw clicks when you chew, which is highly annoying. I have also noticed—”

Monet urged his horse ahead, leaving Azure behind wearing a proud smile.

The group rode on, listening to Blisters practicing different tunes for the better part of an hour. “I’m considering going into entertainment at some point,” the runt unicorn informed everyone proudly. “Ever told me… Wait, is it okay to talk about the traitor, or should we pretend that he’s dead to us?”

“We’re on a journey to apprehend the traitor,” Azure said.

“And murder him,” Monet added from the front of the group.

“Right, well, he told me about this contest show on Earth. It’s called ‘America’s Got Talent.’ He also said there was a similar dancing show called ‘So You Think You Can Dance.’ I, by the way, know I can dance. I’d love to go on one of those shows and strut my stuff. I’ve been working on a tap number at night, which the queen mother says is loud enough to wake the dead. I think that’s a good sign. I’m thinking of adding a juggling aspect to the act—”

“Wa-wa-wait.” Azure cut Blisters off, throwing her chin over her shoulder. “How do you plan to juggle? You don’t have hands.”

“Hilarious,” Gillian said, his voice neutral as he tried to suppress his annoyance.

As the gray waters of the Conca River came into view Monet sped up, veering his horse to the left to run alongside the banks.

“I wasn’t born this century, Queeny. I think I can cross the river on my own,” Monet called over his shoulder.

Monet directed his horse to a spot where the current was slower. Azure kicked her heels into her horse, closing the distance between her and the bank faster. “Monet, I’m not kidding. I’ve learned a thing or two on these adventures outside Virgo.”

She halted the horse and swung her leg down.

“You just have to be in charge, don’t you?” Monet asked, playfulness in his voice.

“I’m serious. The rivers and lakes outside Virgo aren’t like what we’re used to.” She knelt, eying the flowing water.

“Okay, I’ll humor you. What’s so different here? You’ve never been to the Conca River before.” Monet dismounted and stared at Azure, hands on his hips.

“Well, I can tell by that look in your beady green eyes that you don’t believe me, so why don’t you do the honors of calling the creatures I’ve made alliances with?” Azure asked, standing and waving at the river.

“How do I do that?” Monet asked, one eyebrow arching.

“Stick your finger in the river.”

Blisters trotted over with Gillian on his back, both wearing curious expressions.

“Well, you were about to ride your defenseless horse through it. I say you should be a man and find out what’s in this river,” Azure said.

“Oh, fine.” Monet knelt and stuck his hand in the river, his gaze directed at Azure. “What do I do now?”

“For what?” he asked, looking strained from bending over awkwardly.

Azure looked at Gillian. “Friend Gillian, what is Monet waiting for?” she asked the gnome.

“I know how to kick your ass. This is ridic—” Monet jumped back, clutching his hand. “Motherfucker! Something bit me!”

“Oh, yes, I figured as much,” Azure said, leaning down over the river.

A moment later a head full of brown hair rose from the river, attached to a petulant mermaid. Her blue eyes narrowed as she wiped her mouth, spitting blood into the water. She continued to rise until her bare shoulders came into view, but under the surface the current from her tail moving could be seen. “Ugh, witches taste horrible,” the mermaid said, scooping water into her mouth and gargling.

“What the hell is that? There are women in these rivers?” Monet staggered back, his expression mixed.

“Not just women,” Azure said, cautioning him by moving her hand at her side. “Hello. I’m Queen Azure of Virgo, friend of Farrah and Tabby, the mermaids to the north.”

The mermaid blinked at Azure, a clever expression on her face. “Are you the one who baited me with that wizard’s blood? I’ll have a stomachache now, you realize.” She pointed to Monet, who was clutching his hand to his chest.

“Venom? Are you fucking kidding me? You set me up! Very funny, Queen Jerk-face,” Monet said, sounding mostly amused.

“It’s true, I did,” Azure agreed, her eyes on the mermaid in front of her. “Monet, do you have something in your potions kit for stomachaches?”

“You know I do. I planned to spend most of this trip drunk, and to hell with my intolerance of dairy. Balls to the wall, I say,” Monet said, trotting over to his horse, where his saddlebag held different ingredients and potions.

The mermaid eyed the young wizard and then Azure. “Okay, fine. I’ll make an exchange, but first I want to know why you tricked me.”

“Because we didn’t want our horses bitten or eaten alive, for one,” Azure said, holding up a single finger. She added another to it. “Secondly, the other mermaids I’ve met have been a great help to me. I know you’re not the biggest danger when we’re crossing a body of water, but you’re the smartest. You know what we should be aware of when next to the river. We’re supposed to cross and travel south along the banks until we reach the mountains again.”

The mermaid thought this over and then ducked her head under the water, her tail flicking to the surface and splashing them.

“You made her leave. You’re so fucking offensive,” Monet said at her side, a vial in his hand. “If I die from this bite, you’ll pay in the next life.”

“Unfortunately it isn’t fatal,” Azure said, her eyes still on the water in front of them.

“That was a real mermaid! I can’t believe it. I always like to pretend I’m a merman when I take my baths. They’re so graceful. There was this one time when—”

“Shush it for a moment.” Azure cut Blisters off, holding up her hand.

“Are you sure you know what you’re doing, Queen Azure?” Gillian asked, still atop Blisters.

“No. I haven’t known what I’ve been doing for quite some time. You all should have sensed that a while ago.” Azure pressed her hands to her lower back and stared at the river, which was shallow enough for her and Monet’s horse to cross, but much too deep for Blisters.

Mossy water splashed up from the river to assault the group, then a mound of limp plant flew through the air and hit Monet squarely in the face.

“What the fuck?” he exclaimed, his hands pulling the sopping stuff from his cheeks and mouth.

The mermaid surfaced with a coy smile. “Oops. I must have misjudged my aim. There you go. That will keep you from hallucinating. Wrap that around the wound.”

“Hallucinating?” Monet asked, his voice full of excitement. “That’s what mermaid venom does? Why the fuck would I want the antidote for that? Some pay extra to hallucinate.”

Azure shook her head at him. “Hand over the vial, drug addict.”

He slapped the vial into her palm, throwing the soggy plant to the ground.

“Thank you for the antidote, even if my friend is a worthless idiot and doesn’t want to use it. Here you are…” Azure held out the vial to mermaid.

“Breanna,” the mermaid finished her sentence. “And you’re welcome.” She happily took the vial and drank its contents. Now that bona fides had been established, the mermaid of the Conca River appeared easygoing, wearing a playful smile on her face. “You asked about the dangers in and around the river.”

“Yes, can you tell us anything?” Azure asked, her tone greedy.

“I can and will. There are many dangers around the Conca River, but none appear as such. This is a place of great mystery, and what you see isn’t always what it looks like,” Breanne said.

“You’re telling me! Wow! The colors are so bright,” Monet said, his voice distant.

Gillian shook his head at Monet. He’d dismounted and confiscated the river plant, making notes on his trusty pad.