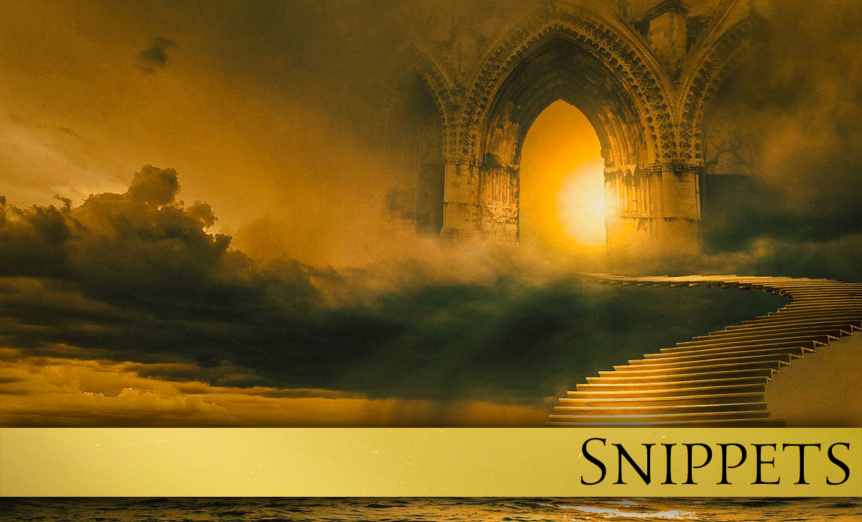 Maria had to act fast. She whipped the sword up in a great arc.

The Arachnid didn’t listen. His fangs protruded out of his dark lips, dripping with venom and thick saliva. He began backing up, saying, “I told you I smelt man flesh. I told ya!”

The other Arachnid made a swipe for Claire, but Claire stumbled and landed on her bottom with a yelp. Sherlock was quick in jumping in front of her and snapping at the Arachnid’s reaching hand. His jaws clamped, making an audible click, one Maria never thought her lovable Bloodhound was capable of. He didn’t make contact with the giant spider, but he had scared him enough for the creature to withdraw his hand.

Gramps stood by, watching all of this with a patient eye. Maria wanted to shout at him to do something, but she was too afraid to take her eyes off of Tabby and the Arachnid for too long.

“Help,” Tabby wheezed. Now the Arachnid wrapped his arm around her neck. He was squeezing because Tabby’s pale face began to turn a bright red, and the two of them walked backward out of the alleyway.

“Come any closer and I pop her head off,” the Arachnid said.

“Yeah!” the other Arachnid echoed. “Then we eat her! Better yet, take a step forward, my dear. I’m hungry. Been too long since I’ve had man flesh.”

Suddenly, she raised her right leg forward and kicked back with all the strength she had left in her body. Maria was not sure of the anatomy of an Arachnid and whether they possessed the same things between their legs as the men of Earth, but apparently Tabby was.

The Arachnid screamed, throwing his head back, his mouth opening into a large black vortex of teeth. Saliva sprayed up into the dark air.

For good measure, Tabby kicked again and this time, the Arachnid dropped her and fell to his knees.

Claire pulled Tabby out of the alley, Sherlock guarding them the whole way, teeth bared, growling low in the back of his throat.

Gramps and Maria stepped forward. Maria with her sword raised and Gramps with his wand held as high as his heart, emitting a violent blue light.

“I suggest you run,” he said, “that is, if you want your lives spared.”

The other Arachnid scrambled at his friend, who was still howling in pain, having been walloped in the family jewels.

Maria lunged forward, the sword high above her head.

The Arachnid on his feet fell backward, sending up a cloud of dirt in his wake.

“Be gone!” Gramps yelled. “Crawl back to the hole you’ve come from.” His wand erupted in a flash of light now, which he sent skyward. It painted the alley and the Arachnids in blue fire. Maria saw the fear written on their faces.

“This isn’t over,” the injured Arachnid screeched.

Gramps feigned an attack, thrusting his wand out in front of him. The Arachnid jumped backward, still holding the wounded area between his legs.

“That’s for me to decide,” Gramps bellowed. “Pray I don’t change my mind. For I am Ignatius Mangood, destroyer of worlds, slayer of daemons! I squash spiders with the heel of my boots!”

That was enough. Once more blue fire escaped Gramps’s wand, they knew their lives were in jeopardy, and they wasted no more time in scrambling up and running into the darkness beyond.

Maria’s jaw hung open. Her grandfather never ceased to amaze her. She turned to him once they were in the clear.

“Where did that come from?” she asked, but she already knew the answer having seen how powerful her grandfather could be in Duke’s memory. Not to mention how he held his own against the nightmare that was Malakai.

Gramps brushed his sleeves back and hid his wand up the right one. He grinned. “I still have a few tricks up here.”

Uh, good one, Sherlock said. Real funny and all, but we have a bit of problem over.

Maria snapped her head in Sherlock, Claire, and Tabby’s direction. Tabby was sitting on the ground in Claire’s lap. There was a deep red mark around her neck that was going a shade of purple. She had tears in her eyes.

Maria rushed to her friend’s side and said, “I’m so sorry, Tab. Are you all right?”

The answer was no, but Maria figured it was a question she wasn’t supposed to answer, so she didn’t.

“I want to go back home, Maria,” Tabby said quietly, as if not to offend Gramps. “I’m not cut out for magical worlds. I’m not a witch.”

Maria took Tabby’s hand. “No, but you’re brave. One of the bravest girls I know. I mean, you kicked a giant spider in the nuts. That’s saying something.”

Tabby let herself smile at that.

“Yeah, I guess I am, but I still want to go home, Maria. I’m sorry. I can scratch kicking a giant spider in the balls off of my bucket list and live out the rest of my life knowing I’m a badass. What use will that be if I barely make it to my mid-twenties?”

Maria nodded and looked toward Gramps, who was slinking behind them, looking on with hurt in his eyes.

“Can we take Tabby home?” she asked.

She looked back at Tabby. “Can’t persuade you to stay?”

She then looked at Claire. “What about you? Do you want to go back, too?”

Claire wouldn’t meet Maria’s eyes. “I…uh,” she stammered as she looked at Tabby. “It’s nothing personal, but Tab is hurt and I really didn’t think I was going to have to deal with another giant humanoid spider, you know?”

Maria nodded. Despite the obvious disappointment, she smiled at her two friends. It was her fault, after all, that Tabby was hurt and they were all in some foreign world where two moons hung above them and spiders walked on two feet, craving human flesh.

“Come, come,” Gramps said, walking over to Maria and putting his arm around her. Maria sheathed her sword. “It won’t be long until they come back with more reinforcements.”

“Your wish is my command, dear,” Gramps said. He closed his eyes, a peaceful calm coming over his features, and he began to sing in that sweet, high melodic tone that Maria first heard when she was a baby.

A portal opened in the middle of the main street. Maria could see the inside of Salem’s Ice Cream Shop, the checkered tiled floors, the tables still pushed together from where Maria woke up from her run-in with Malakai. The window was fixed. Salem was wiping down the front counter while opera music played loudly over the speakers.

“After you, Maria,” Gramps said, sweeping his arm toward the portal.

Wanna put her on my back? I can champion her like a medieval horse, Sherlock said.

Maria snorted, causing Tabby to give her an odd sideways look. “Did Sherlock just offer to give me a ride?”

“Did you hear him?” Maria asked.

Tabby shook her head. “No, I can just tell by the way he looked at me. Tell him I said thanks for the offer, but I’m okay. I’ll survive.”

Duh, I can hear you, Sherlock said to Tabby.

Maria chose not to let her know what he said, instead saying, “He said you’re welcome.”

That’s not what I said at all!

Maria glared at him and he quickly shut his mental mouth.

Tabby, now with one arm around Claire and the other around Maria hobbled toward the portal. Gramps continued singing.

They all went through to the other side.