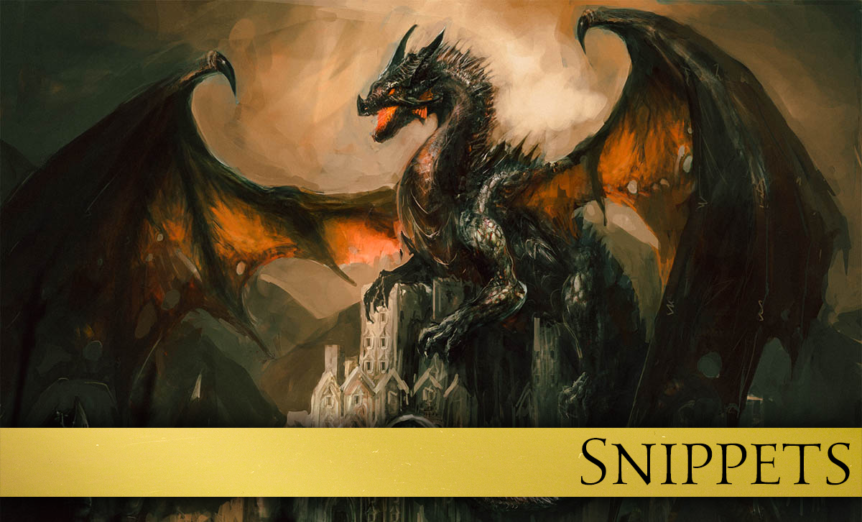 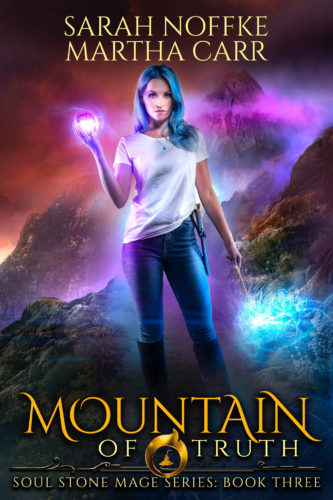 Monet tapped his fingers against his mouth before pointing at the tiny unicorn, a curious look on his face. “Don’t look now, Azure, but I do believe you’re being followed.”

Azure halted in the cabinet room and blew out a breath. The warmth of the fire and the moment of silence were more than welcome. “I’m fully aware. I did tell him to wait outside the House of Enchanted, but he wouldn’t have it.”

Gillian slid off his seat and trundled over to where Azure stood at the front of the room, an expression of bewilderment covering his face. “You. Have. A. Unicorn,” he said, his words abbreviated.

“So it would appear,” Azure replied, throwing herself into the nearest seat. Exhaustion had taken over her brain.

“And the water source?” Gran asked, standing and staring down at the two-foot-tall unicorn.

“It’s back to normal. However, we need to strengthen security measures at the border. We can’t have that happening again.” Azure turned to Monet. “You didn’t drink any water recently, did you?”

He scoffed at her, his eyelids heavy. “You know I don’t drink that crap—only liquid that gives me a buzz. Gillian and I share that preference.”

Azure was suddenly grateful that the people in her cabinet were a bunch of drunks. And Ever was away retrieving Richard, which meant he was safe.

“You. Have. A. Unicorn,” Gillian stated again, his voice full of awe.

“Yes, it was a part of the agreement I made with the unicorns. They would purify our water and I would care for this little one,” Azure said. She sank down in her seat, covering her face with her arm to block the light in the room. This moment of peace wasn’t going to last for long. That damn unicorn was simply biding his time, enjoying the attention he was getting from the gnome and the queen mother, who were both hovering over him.

“This is unheard of. Never have the unicorns—” Gillian cut himself off, pulling a pad and pencil from his suit pocket. He scribbled away as the unicorn in front of him stared at him with soft eyes.

“You’ve been given a unicorn to care for?” Gran asked, extending a hand to the little foal.

“Yes, I have,” Azure said, dismissing this at once, “but right now we need to focus on finding out who has been infected by this virus. I’m sure it’s a sizable population. We need to craft a speech—something that will put the people’s fears at ease and lets them know we are working on finding a solution. The infected will start to lose their magic soon, which means we need to turn our attention to finding a cure. But I also need to stop Emperor Frederick and the Duke of Terran. They’ll just keep trying.”

“You. Have. A. Unicorn,” Gillian repeated, his voice dripping with disbelief.

“Yes, Gillian. But I need to focus on my people. They’ve been infected, and need our help,” Azure muttered, thinking she’d pass out right then. She would need to rest before she set off for the mountains.

“Azure is always bringing home strange pets. Unicorns, pixies…gnomes,” Monet said, not at all looking impressed by the presence of the rainbow-haired unicorn.

Gran pulled back her hand when the unicorn touched it with his nose. “He touched me,” she exclaimed, turning to Gillian with wide eyes.

“He has a name,” Azure said dryly.

“What? How do you know?” Gillian asked, shocked. “Queen Azure, do you speak Unicorn?”

She shook her head, feeling the beat of a drum starting in her temples.

“No, but I speak your language,” the tiny unicorn stated plainly, his voice high-pitched like the sound of a chair scraping against the floor.

“Yep, I totally guessed that was going to happen,” the young wizard said.

“Wait… Did he just speak?” Gillian leaned forward, staring intently at the unicorn, who seemed to enjoy the attention.

“I assure you he did,” Azure said, pulling her arm off her face and staring bleary-eyed at the scene before her. “Gillian, Queen Mother, Monet, will you please all welcome Blisters to the House of Enchanted? He will apparently be a resident now, since he says the stables are for horses.”

Gillian let out a gasp. “Of course stables are beneath this incredible animal. I’m appalled on his behalf that you even suggested it.”

“Yes, I suggested it. The House of Enchanted wasn’t constructed for a unicorn to take up residence in it. Even though he is small, we’re not used to hooves on our floors,” Azure said, turning her gaze on the unicorn. He batted his long eyelashes at her, trying to earn his way back into her graces.

“I’m sure that measures can be put into place,” Gillian replied. “A unicorn seeking residence with someone outside of their species… This must be a first. What a wonderful honor!”

“You have no fucking idea.” Azure pressed her elbows down on the table and cradled her head in her hands.

Gillian knelt. “Blisters, it is my pleasure to make your acquaintance. We will ensure you’re comfortable in the House of Enchanted.”

There was a small silence where Azure smiled to herself. These two had no clue. Soon, though, they’d get it.

Blisters stared up at the gnome and the witch, blinking his adorable blue eyes. Then he opened his mouth, and their peace was forever assaulted. “Thanks!” the unicorn squeaked. “Man, it’s great to be here. I hate the woods. There are leaves and bugs in the woods. We have to sleep on the ground. The herd seems to like it, but they don’t know what they’re missing. I’m looking forward to sleeping on a down-filled mattress. Oh! And can I have my own bathroom? I love the idea of taking baths. Oh! And having manicures. And cuddling with elves. I’d like to have a cat, too. When is my first fitting? I want robes in periwinkle blue to match my eyes. And…let me see, I made a list of things I’d get once I was at the House of Enchanted.” The unicorn turned in a circle, his nose following his tail like that was where he left the list.

“Queen Azure?” Gillian said with a question in his voice.

“From what I can tell, he’s fully grown, obsessed with witches, and causes havoc wherever he goes,” Azure said, remembering that the bottom half of her robes was drenched from falling into a mud pit.

A laugh, clear and loud, rang from Monet’s mouth. “Oh yes, I was waiting for this one. Azure has adopted a special needs unicorn.”

The unicorn, who didn’t seem to mind Monet’s jab, curled up by the fire, warming himself after the long and eventful morning. The little guy had talked the entire fucking time they traveled back to the House of Enchanted. He was sweet enough, but left a little to be desired. And apparently he’d been given the name ‘Blisters’ because that’s what his incessant voice did to the unicorns’ ears.

“He has the magic of the unicorns, though?” Gran asked.

“Yes, as far as I can tell,” Azure said, lifting her head to regard the peaceful unicorn, who was already snoring like a Labrador taking a nap.

“Well, our water sources are healed, and we also have a new source of magic. I would count this as a win,” Gran said.

“Yes, but he’s going to be quite the drain on the House of Enchanted, not to mention that he’s incredibly annoying and accident-prone,” Azure whispered to the queen mother.

“We dealt with this when Monet was born, and we can do it again,” she said with a smile.

“How dare you compare me to a reject unicorn?” Monet scoffed.

“I think the comparison was actually quite kind to you,” Gillian said, and turned his attention to Azure. “I think it’s time that we craft a statement to the people of Virgo. This is going to be a difficult time for them, and they need to know what’s going on. But we can use Blisters to soften the blow. Any kingdom that has a unicorn at its disposal will appear more powerful.”

Azure had known that asking Gillian to be on her cabinet would be a good idea. “Yes, I think you’re on to something,” she said, winking at the gnome.